Getting here: From Helsingborg by bus via Höganäs and Jonstorp, or Ängelholm. We recommend that you start from Utvälinge direction Arild during weekends since the bus from Utvälinge is less frequent. Weekdays – your choice!

Start your walk from Utvälinge with the Kullaberg as your reward in the horizon! Utvälinge is together with Välinge, Tånga and Rögle one of the so-called “Tegelbyarna” or brick villages of northern Helsingborg. The brick yard in Utvälinge started in 1870 and made up one of the 17 brickyards in Helsingborg. In total, there have been close to 300 brickyards in Skåne over the years. The easiest way to get here is by bus from Ängelholm or Höganäs. 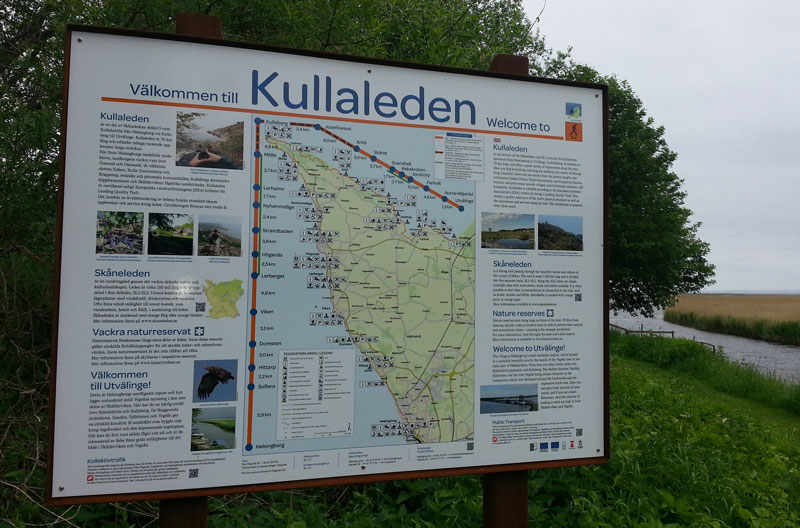 Lots of sand and lots of salt, a valuable nursery for birds, fish and everything in between. Walk along coastal footpaths and roads along the shallow bay. An old fashioned coffee house, an historic listed brick factory with bronze sculptures and the best kind of swimming in the sea.

On this southern point of the bay Skälderviken the sea is shallow and the water unusually salty. Both the bay and the lagoons are exclusive nurseries for different kinds of fish fry. The large numbers of small animals attract birds, so don’t forget your binoculars. The mouth of the River Vegeå and the island of Sandön always provide an insight into the lives of ducks, waders and gulls. You will probably catch a glimpse of an oyster catcher, curlew or other visiting sea birds.

Furthest out on the island of Rönnen you can just see the port which was used for larger boats and in the pastures to the south, you can find the railway tracks which transported the bricks and tiles. People are not welcome on the island but when you walk by, you can keep a look out for those who do visit: common seals. Peregrine falcons are also often seen here.

On the coastal meadows between Norra Häljaröd and Jonstorp you can botanize among the plants and try to read the amazing history from the surroundings. The meadows are among the last remains of the once many tens of kilometres long Kulla fälad: the common pastures for the villages. On the headland east of Farhultsbaden there are rare plants such as marsh gentian and deer grass.  At Farhultsbaden you wander alongside the sea and soft dunes. There you will find the summer restaurant Solvik, where you can refill your water bottle. (There is no water supply in the windbreak at Svarteland).

You will find the bus stop in Jonstorp village center, approx 1000 meters from the trail, following grey signs. There you also will find a grocery shop a pizzeria and an historical inn with fabulous food!

There is a B & B in Jonstorp and to get to the nearest hostel, you should continue to the little village Svanshall (appr 2,5 kilometers) and then walk 1,5 kilometers from the trail.

Jonstorp is a well-known place amongst archaeologists. In the Stone Age, the island of Kulla had a narrow spit and the opportunities for fishing and hunting for seals was excellent. Thousands of flint axes, arrowheads and other tools which have been dug up, have revealed a great deal about Stone Age man’s life and choices. A preserved woven fishing trap made of wood was also found buried underground.  Next to the village, you go through the beautiful countryside of Revet. If you visit in April, the pastures are a sea of pasque flowers.

You are met by lots of timber-framed buildings and brick, straight roads and small harbours. In addition, there are beaches with cliffs, pebbles and bathing jetties. In Svanshall there is a fish restaurant and a little shop for ice cream and sandwiches for a picnic.

There are also several quarries along the trail. East of Svanshall, limestone was quarried, hundreds of years later, blocks of ice were sawn up in the quarry and in the 1940s thrilling matches of bandy were played. The large hand sawn ice blocks were transported by horse and cart to the dairies in the area and then kept the dairy products cold for the whole summer.

At Bökebäck you walk through woodland and across pastures, a tiny conserved fragment of what was once the enormous common grazing land called Kulla fälad. The view out over the pebble beach, the huge area of shingle and Skälderviken is enchanting. Just north of the Böcke harbour, there is a little road leading to Tranans SPA, and a B&B, approx 250 meter from the trail. Once out of the heathland, it is worth taking a short detour (about 300 metres) from the trail and continuing straight on the road to visit one of the restaurants in the area. Flickorna Lundgren and Rut på Skäret are two classic restaurants serving both meals and snacks.

Then head back to the trail which takes you back down to Skäret harbour and the beach. Here you can see the Littorina Sea’s coastal banks with and the rounded shingle and stacks formed from primitive rock. Follow the coast with its fascinating cliff formations towards Arild.

Arild has two hotels with restaurants, approx. 100 metres from the trail above the harbour, and a vineyard (approx. 1.5 km from the trail) with cabins and flats for rent.

Once in Arild, gather up your strength before making the climb all the way up Kullaberg, which starts straight after the harbour.